A hexane extract of Plantago major was investigated by bioactivity-directed fractionation, using an in vitro cyclooxygenase-2 (COX-2) catalyzed prostaglandin biosynthesis inhibition assay, and resulted in the isolation of ursolic acid (1). This triterpenoid showed a significant COX-2 inhibitory effect, directly on the enzyme activity, with an IC50 value of 130 íM and a COX-2/COX-1 selectivity ratio of 0.6. The structural isomer oleanolic acid (2) was found to be less active than 1, with an IC50 value of 295 íM, but showed a similar selectivity ratio (0.8). Furthermore, no significant inhibition on COX-2 or COX-1 was observed by the triterpenoid, 18a-glycyrrhetinic acid (3). The direct inhibitory effect of 1 and 2 on COX-2 catalyzed prostaglandin biosynthesis increased with preincubation, indicating a time-dependent inhibition, while the effect on COX-1 was found to be independent of preincubation time.

The discovery of a new cyclooxygenase (COX, prosta-glandin endoperoxide H synthase, PGHS) isoenzyme, COX-2, has sparked a new surge of interest in this enzyme. 1,2 A selective COX-2 inhibitor is suggested to exhibit an antiinflammatory effect, although with fewer gastrointestinal side effects compared to traditional nonsteroidal antiinflammatory drugs (NSAIDs), since the constitutive COX-1 catalyzed biosynthesis of prostaglandins (e.g., in the gastric mucosa) is unaffected. 1 Under normal conditions, the level of constitutively expressed COX-2 is very low in most cells, but a 10- to 80-fold increase of COX-2 expression has been detected after induction by cytokines, growth factors, oncogenes, serum, and tumor promotors.

1,2 The increased production of prostaglandins, observed at acute and chronic inflammatory sites, as well as in transformed cells and in tumors, is thought to be partly due to an upregulation of COX-2. 2,3

As part of a search for new COX-2 selective compounds of natural origin, the perennial herb Plantago major L. (Plantaginaceae) was subjected to bioactivity-directed fractionation, guided by a COX-2 catalyzed prostaglandin biosynthesis in vitro assay. 4 This plant was selected because it is well known in the traditional medicine of countries in Europe, Asia, Africa, and South America for its use in the treatment of inflammation and wounds. 5 8 Furthermore, an aqueous extract of P. major has been reported to exhibit antiinflammatory activity in several in vivo models, 9 where some of the observed activities have been suggested to correlate with an inhibition of COX-2. 10

The isolation was focused on the hexane extract, which was found to be the most active extract of P. major and was presumed to contain triterpenoids. Particular interest was taken in triterpenoids, inasmuch as they are known to possess antiinflammatory, antiulcer, and antitumor effects. 11,12 The inhibitory effect of the structural isomers ursolic acid (1) and oleanolic acid (2) was investigated. Moreover, the triterpenoid analogue, 18a-glycyrrhetinic acid (3), with the carbonyl at position 29 and an additional ketone group at position 11, was tested. Many plants containing 1, 2, and/or 3 have been used in traditional medicine to treat inflammatory disorders, and the occur- rence of 1 and 2 in P. major has been reported in previous phytochemical studies. 11,13,14 All of these three compounds are known to possess inhibitory effects on inflammation and on various stages of tumor development. 11,14,15 The antiinflammatory activity of 1 and 2 has been attributed to the inhibition of histamine release as well as lipooxy-genase, COX, and complement activity. 11 In a recent publication by Suh et al., 1 and 2 were reported to exhibit no substantial suppression of the de novo formation of lipopolysaccharide induced COX-2. 16 There are two ap- proaches to inhibit COX and prostaglandin production, either by blocking the upregulated COX mRNA expression (de novo synthesis) and the subsequent prostaglandin production, or by a direct inhibition of the enzyme activity, consequently by affecting the capacity to catalyze the prostaglandin biosynthesis.4,16

A limited number of natural products are reported to have been investigated on COX-2 inhibitory effects, and they were tested mostly on suppression of COX-2 mRNA expression, although a few were investigated on enzyme activity. 16 25

Based on the activities mentioned, our aim was therefore to study the inhibitory effect on the COX-2 enzyme, of extracts of P. major by bioactivity-directed fractionation,

as well as the inhibition of the triterpenoids 1, 2, and 3, using a COX-2 catalyzed prostaglandin biosynthesis assay.

A Soxhlet hexane extract of the entire plant of P. major was investigated by bioactivity-guided fractionation using a COX-2 catalyzed prostaglandin biosynthesis assay in vitro. The hexane extract was separated by medium-pressure liquid chromatography (MPLC) over silica gel followed by preparative TLC, which led to the isolation of ursolic acid (1) as the major active component. The structural identification was performed using FABMS and 1H and 13C NMR spectroscopy, by comparing the data to those previously reported for ursolic acid, 26 as well as to

The inhibitory effects of ursolic acid (1), oleanolic acid (2), and 18a-glycyrrhetinic acid (3) were further investigated by using authentic samples (Table 1). Compound 1 selectively inhibited COX-2 catalyzed prostaglandin biosynthesis, measured after a 10-min preincubation, with an IC50 value of 130 íM, compared with COX-1 derived prostaglandin synthesis, which showed an IC50 value of 210 íM (Figure 1). The resulting COX-2 selectivity was 0.6. Compound 2 inhibited COX-2 and COX-1 catalyzed prostaglandin biosynthesis, with IC50 values of 295 íM and 380 íM, respectively (10-min preincubation), thereby exhibiting a COX-2/COX-1 selectivity ratio of 0.8 (Figure 2). Conse- quently, 1 is a more potent inhibitor of both COX-2 and COX-1, compared to 2, although both compounds show similar COX-2 selectivity ratios. Interestingly, no signifi- cant inhibitory effect of 3 on COX-2 or COX-1 was detected, when tested at 100 íg/mL (212 íM) and 200 íg/mL (425 íM) after a 10-min preincubation. A comparison with COX-2/COX-1 selectivity ratios of some traditional NSAIDs and NS-398, a synthetic selective COX-2 inhibitor, obtained in the same assay system, 4 resulted in a rank order with NS-398 as the most COX-2 selective compound followed by 1, 2, ibuprofen, naproxen, and finally the most COX-1 selective, indomethacin (ratios 0.5, 0.6, 0.8, 60, 100, and 120, respectively). 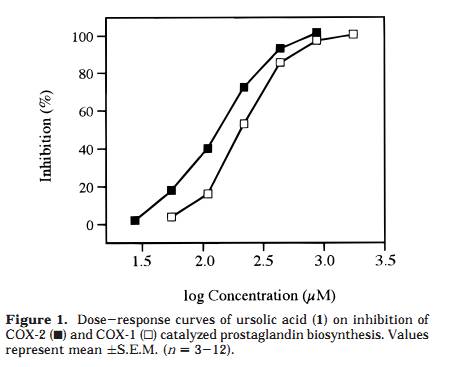 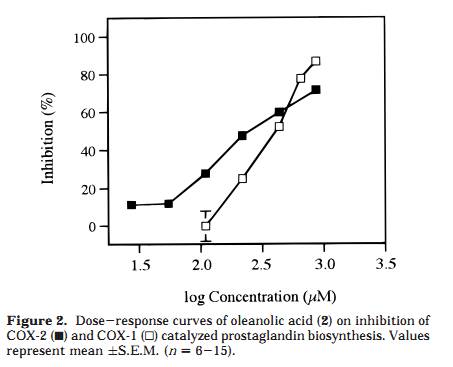 dependent behavior was observed, although less pronounced, when tested at 200 íg/mL. Oleanolic acid (2) demonstrated less time-dependent inhibition than ursolic acid (1), changing from about equal potency to more COX-2 selectivity, when tested at 100 íg/mL (Figure 4). Moreover, the activity shifted from COX-1 active to more equipotent when measured at 200 íg/mL. These results suggest that the behavior of 1 and 2 is similar to that of NS-398, which exhibited equal potency toward COX-2 and COX-1 when

measured without preincubation, but showed COX-2 selective inhibition when enzyme and inhibitor were preincubated for 10 min or more. 27 Further studies will be needed to elucidate fully the kinetic behavior of these two triterpenoids toward the two COX enzymes.

The triterpenoids ursolic acid (1), oleanolic acid (2), and 18a-glycyrrhetinic acid (3) as well as the extracts of P. major, are known to possess antiinflammatory activities in vitro and in vivo. 9,11,28,29 Suh et al. have found that neither 1 nor 2 showed any substantial suppression on

LPS-induced COX-2 mRNA expression (de novo formation) and the subsequent prostaglandin production, whereas some derivatives of 1 and 2 blocked the expression. 16 No change in COX-1 protein levels was observed for any of the compounds. Maybe the difference in inhibition of prostaglandin production, compared with our results, is due to methodological differences such as the use of RAW cells, compared to sheep placental cotyledons, as well as different protein and substrate concentrations, which are factors known to give differences in IC50 values. 30 Preliminary results indicate that a decreased IC50 value of 1 is obtained by using a lower protein concentration, which further supports the necessity of a standardized protein level (unpublished results). To compare the enzyme activity of 1 and 2 with our results is not possible, because Suh et al. neither have reported IC50 values of 1 and 2 nor compared their activity with a COX-2 selective reference compound. However, the results of Suh et al. indicate that 1 and 2 exhibit no suppression of the de novo formation of COX-2 mRNA, 16 and our results showed that both compounds inhibit COX-2 catalyzed prostaglandin biosynthesis atabout the same magnitude as the COX-2 selective inhibitor, NS-398.

An inhibitory effect of 1 3 on carrageenan-induced ratpaw edema has been reported, and 2 also exhibits an inhibitory effect on adjuvant-induced arthritis in rats. 28,29,31 33 Also, the aqueous extract of P. major has been found to inhibit carrageenan-induced rat-paw edema and inflammation induced by croton oil in the air-pouch test using rats. 9 Interestingly, these three models have been used by Masferrer et al. to evaluate the role of COX-2 in inflammation in vivo. 10 The inflammation induced was shown to be due to induction of COX-2 in the cells, and subsequent prostaglandin production was blocked by NSAID administration. Therefore, our present results, where a hexane extract of P. major as well as 1 and 2 inhibited COX-2 catalyzed prostaglandin biosynthesis, may contribute to an explanation of the above-mentioned antiinflam-matory activities in vitro and in vivo. Further studies are needed, however, to explain the opposing effect of 3.

A therapeutic advantage, in relation to COX-2 inhibition of selective COX-2 inhibitors, is the low ulcer toxicity. Vane and Botting have suggested a parallel relationship between COX-2 selectivity and gastrointestinal side effects with NSAID treatment, such that COX-2 selective compounds cause fewer ulcers. 1 Compounds 1 and 3 have been reported to inhibit stress-induced ulceration in rats, and 2 has been shown to reduce chemically induced ulceration, produced, for example, by NSAIDs. 34 36 A decrease in stress-induced ulceration in rats by aqueous and methanol extracts of P. major has also been observed. 37 Recently, Masferrer et al. demonstrated that administration of COX-2 selective inhibitors did not produce stomach lesions, in contrast to administration of nonselective NSAIDs. 10 It may be concluded that the previously reported anti- inflammatory and antiulcer effects of ursolic acid (1) and oleanolic acid (2) in vitro and in vivo can be partly explained by a selective time-dependent inhibition of the COX-2 enzyme activity. Moreover, our results indicate that 1 and 2 may be promising leads for further exploration of selective inhibitors of COX-2 catalyzed prostaglandin biosynthesis.

Plant Material. Entire plants of Plantago major L. (Plan-taginaceae) were collected in July 1997, in Uppsala, and identified by Dr. Inga Hedberg (Department of Systematic Botany, Uppsala University). A voucher specimen, coded AIP 97006, has been deposited at the Division of Pharmacognosy,Uppsala.

Extraction and Isolation. The dried and powdered plant material (29.1 g) was successively extracted in a Soxhlet apparatus with hexane (0.4 g), CH2Cl2 (0.2 g), MeCN (0.7 g), and H2O (7.7 g). All extracts were evaluated for inhibition of COX-2 catalyzed prostaglandin biosynthesis, where the hexane extract was found most active. The hexane extract was separated by MPLC. The extract (0.3 g) was dissolved in hexane (2.0 mL) and injected onto the SEPARO column (length 4.8 cm). The column was eluted with a continuous gradient from hexane, over toluene to MeOH and H2O. Initially, the mixing chamber contained 50 mL of hexane, and the reservoir, the first of the 13 premixed binary (less polar/more polar solvent) gradient mixtures, of 25 mL each, which were suc-cessively fed to the reservoir during separation. Fractions were combined according to TLC [toluene- MeOH (9:1) or CHCl3 –MeOH- H2O (9:3:0.5)], yielding 15 fractions.

All fractions were tested for inhibition of both COX-2 and COX-1 catalyzed prostaglandin biosynthesis. Fraction 10 (11.5

mg) was found to inhibit COX-2 by 47% 0.8 and COX-1 by 36% 0.9, measured after 10 min of preincubation of enzyme and test compound, and fractions 10 and 11 13 (24 mg) were further purified by preparative TLC [toluene- MeOH (9:1)], yielding four fractions (A- D). Final purification of fraction A (5.6 mg) was performed by column chromatography over Sephadex LH-20 (CH2Cl2), yielding two fractions (A1 2). Fraction A2 (1.9 mg) showed 42% 1.0 inhibition of COX-2 and 32% 0.4 of COX-1 and was identified as ursolic acid (1).COX-1 and COX-2 Catalyzed Prostaglandin Biosynthesis Assay. Experiments were performed as described previously by Noreen et al. 4 The inhibition of COX-catalyzed prostaglandin biosynthesis was calculated as the relative decrease in radioactivity (disintegrations per minute) of the samples containing test substance as compared to the solvent vehicle. IC50 values were obtained by linear regression analysis, and values represent means S.E.M. of 2 5 experiments (n =3 -18).